Since the beginning of the reign of Queen Elizabeth II, most excited enthusiasts are patiently waiting for Princess Diane’s appearance.

The wait is over. The Crown has finally found its Princess Di, and she’s smoking. The regal Netflix series announced last year that actress Emma Corrin’s been cast for the highly-anticipated role of Lady Diana Spencer. She is coming to make her debut in the fourth season.

The young actress has been hooked to the series since it was debuted in 2016. This would officially be her first central role on television.

In a press release, Corrin said, “Princess Diana has been an icon for her, and her effect on the world remains profound and inspiring. To be given a chance to explore her through Peter Morgan’s writing is the most exceptional opportunity, and I will strive to do her justice.” Her way of delivering her intent is proof she’s going to be the perfect match for the role inside out.

First shoots of the set are out, and Corrin merely looks stunning. 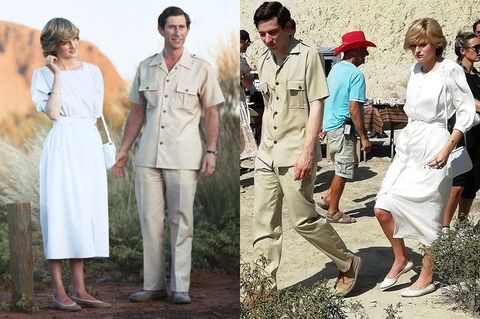 It’s interesting because I thought the actress to surface as a teenager firstly. And we can watch a lovely little Di grow up. The star regularly posts on her Instagram and twitter page almost on a daily basis, describing her experience on the set as surreal. The actress boasts her plain white dress Diana wore to Ayers Rock in Australia in 1983. The royal Taxi driver next to her is probably Prince Charles

The English actress is 23 years old, hailing from the town of Tunbridge Wells in Kent. Before this, she’s done three small roles, none of this magnitude.

At the time when the script was still in works, the artist only had sixty followers on Instagram. Now it’s a growing number, pretty soon Princess Diane is going to take over all of England, possibly Europe too. Don’t believe me? Google Emma and she’s the first result that crops up, already leaving behind Emma Stone and Watson – two massive names in the industry.

When Will The Season 4 Be Aired?

The official release date hasn’t been put out yet. Though it is safe to say, this season is going to premiere somewhen this year because we already got a few pics and snippets from the set to know they’re spinning it. Hang on the thread as your life depended on it because this is going to be the most kick-ass season to see Diana ascended to the Crown.

Marvel She-Hulk Show: Know About Its Production Status And The Possible...

Harley Quinn Season 3:Is It Really Happening At HBO Max?

Here’s How The Filming Of The Live-Action Movie Mulan In China...

Everything’s Gonna Be Okay: Season 2? Here’s What Is Known So...

The Handmaids Tale Season 4: What Fans Should Know About Its...

Reports Confirms That A Massive Dangerous Asteroid Is Rushing Towards Earth

Netflix Finally Gets The Right For The Romantic Drama Malcolm &...

The British science-fiction television show Doctor Who is ready to be renewed for season 13. The spectacle was rejuvenated back in 2005 after its...
Read more
TV Shows

Netflix is the best streaming giant out there without question and the most loved, not just because of its endless variety of shows and...
Read more
Movies

Deadpool 3: Release Date, And Every Other Detail About The Ryan Reynolds Starrer

Fans have been eagerly waiting for a new Deadpool film since 2018. There has been speculation about Disney and Deadpool for a long time....
Read more
© Copyright 2020 The Digital Wise Inc. | SEO By Virtual SEO Expert